Commercial traffic at the Pharr-Reynosa International Bridge stopped Monday and a similar protest affected traffic into and out of El Paso. The blockades could impact the flow of produce to restaurants and grocery stores. 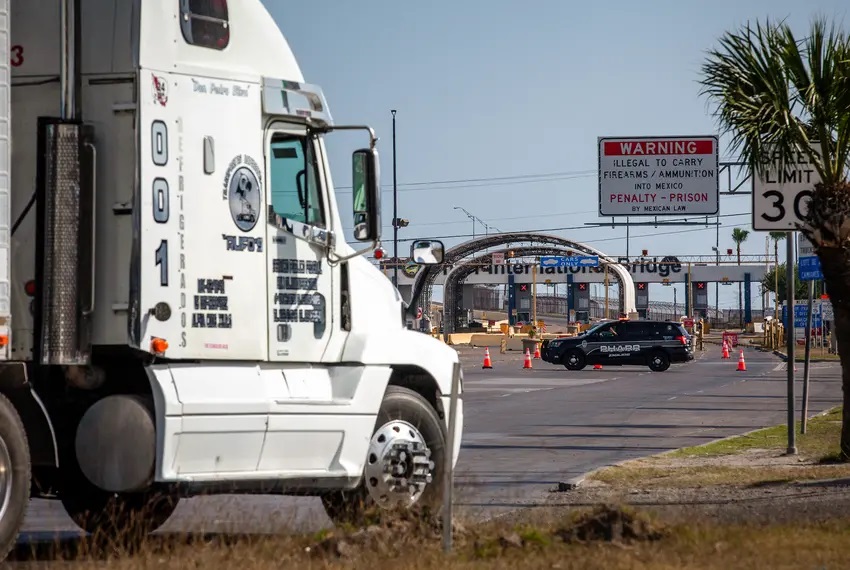 Commercial traffic at the Pharr-Reynosa International Bridge stopped Monday and a similar protest affected traffic into and out of El Paso. The blockades could impact the flow of produce to restaurants and grocery stores.

Commercial traffic at a key South Texas border crossing has stopped after Mexican truckers on Monday blocked north- and southbound lanes on the Mexico side of the Pharr-Reynosa International Bridge in protest of Texas Gov. Greg Abbott’s decision to have state troopers inspect northbound commercial vehicles — historically a job done by the federal government.

The bridge connecting Pharr and Reynosa is the busiest trade crossing in the Rio Grande Valley and handles the majority of the produce that crosses into the U.S. from Mexico, including avocados, broccoli, peppers, strawberries and tomatoes. On Monday, with trucks backed up for miles in Reynosa for the fifth day in a row, some produce importers in Texas said they have waited days for their goods to arrive and already had buyers cancel orders.

“One of our customers canceled the order because we didn’t deliver on time,” said Modesto Guerra, sales manager for Sterling Fresh Inc., which imports broccoli from Central Mexico via the Pharr bridge before shipping it to the Midwest and East Coast. “It’s something beyond our control.”

While many companies cross perishable foods in refrigerated trucks, Guerra said the bottlenecks could lead to equipment failures that cause produce and other products to spoil in the heat.

“Those refrigerated units are powered by diesel,” Guerra said. “These trucks are in line and when the diesel runs out they have no way of refueling.”

International bridges elsewhere in the Valley, as well as in Eagle Pass, El Paso and Laredo, have also seen delays, with many commercial products produced in Mexico — like electronics, vehicle parts and medical instruments — also held up. A similar protest appeared to be playing out in Ciudad Juárez, Mexico, on Monday afternoon, affecting traffic into and out of El Paso, according to Border Report.

In response to the Biden administration’s recent announcement that it plans to end Title 42 — a pandemic-era emergency health order that lets federal officials turn away migrants at the border without the chance to request asylum — Abbott on Wednesday ordered the Texas Department of Public Safety to increase its inspections of commercial vehicles, which he said drug cartels use to smuggle humans and drugs into the United States.

At times, DPS troopers appear to be checking every commercial vehicle that crosses select international bridges, with each inspection taking between 45 minutes and an hour.

Mexican news outlets reported that about 500 truckers are blocking southbound traffic into Mexico to prevent the entrance of U.S. trucks. Truckers told El Mañana in Reynosa that they had waited three to four days at the international bridge and were running out of fuel while they waited.

One trucker told the news outlet that prior to Abbott’s order, he made two crossings into the U.S. a day. Now, he’d be lucky to have one or two a week given the long delays at the bridges.

“We are losing just as much as them,” he said. “When they start needing more produce, the prices are going to go up.

“No one has told us what the reason for this is or asked what solutions we can come up with together,” he added, saying the blockade will continue until their issues are resolved. “All we know is that it’s an order from the governor of Texas.”

Abbott’s office did not immediately respond to a request for comment.

Drivers at the Ysleta Port of Entry connecting El Paso and Ciudad Juárez, also commonly referred to as the Zaragoza Bridge, parked their trucks in the northbound commercial lanes with their trailers also blocking the southbound commercial lanes around 3 p.m. Monday after complaining about spending several hours in line to cross the border, according to Border Report. 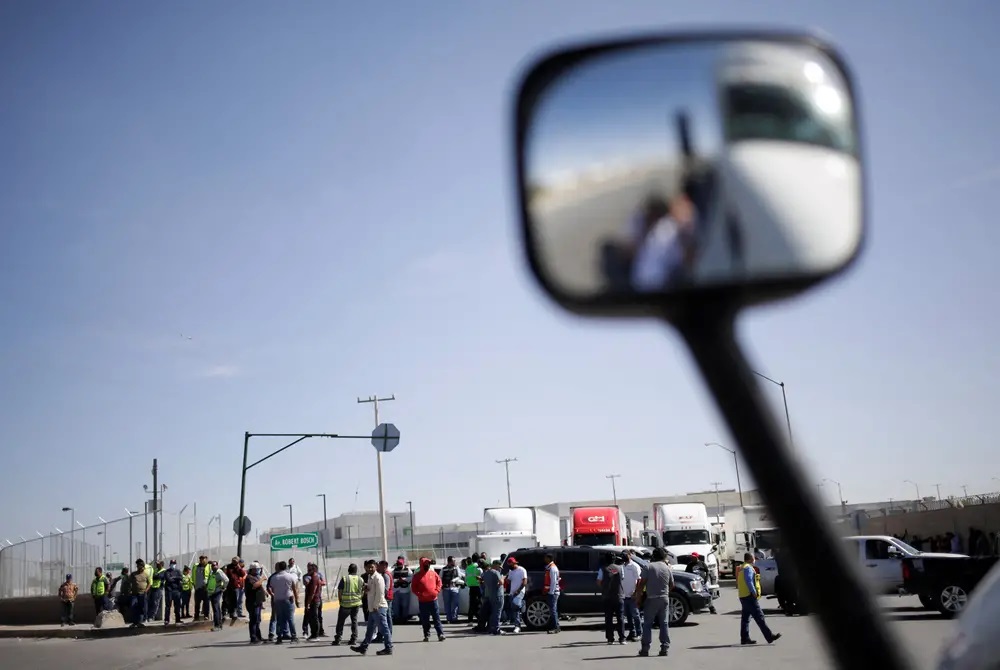 Truckers trying to get into Mexico wait near their trailers at the Ysleta Port of Entry in Ciudad Juárez on Monday, stranded by a protest against truck inspections imposed by Texas Gov. Greg Abbott. Credit: REUTERS/Jose Luis Gonzalez

David Coronado, El Paso’s managing director of international bridges and economic development, did not respond to a request for comment on Monday evening.

From 3 to 5 p.m. Monday, the average time for commercial vehicles to cross the border at the Ysleta Port of Entry peaked around 420 minutes, or seven hours, according to the U.S. Customs and Border Protection website. That’s far above normal wait times.

For personal vehicles and pedestrians, wait times to cross at the Ysleta Port of Entry remain standard for a Monday evening, according to the Border Protection website.

U.S. Rep. Vicente Gonzalez, D-McAllen, joined a chorus of elected officials from the border who called on Abbott to rethink his strategy, saying the DPS inspections duplicate inspections already conducted by the federal government at the ports of entry.

“Governor Abbott’s unnecessary secondary inspections are killing business on the border,” Gonzalez said in a written statement to The Texas Tribune. “If this continues it will cause further supply line issues impacting America. And we will see prices of produce and other imports rise at the grocery store. He needs to allow the U.S. Customs and Border [Protection] inspection folks to do their job.”

Commercial traffic bottlenecks on the Mexican side of the Pharr-Reynosa bridge are not unusual. From time to time, disgruntled Mexican farmers have used their tractors to block traffic in the border state of Tamaulipas to protest low government payments. Sometimes their protests disrupt traffic flow within Reynosa, and other times they block bridge traffic.

International bridges across the Texas-Mexico border also saw significant lines in 2019 when former President Donald Trump reassigned hundreds of customs officers from ports of entry to assist Border Patrol in dealing with detaining migrants crossing the border in between the bridges.

Those delays lasted hours or days in some cases. This time, importers and local officials are bracing for an even longer disruption to cross-border trade. Even without state troopers stopping vehicles, inspection times at international bridges have long been a source of delays due to federal staffing shortages as well as technology and infrastructure problems.

Hidalgo County Judge Richard Cortez said he can’t remember a Texas governor upending international trade along the border like this.

“This is a very serious situation,” Cortez said in an interview. “Truckers on the Mexican side closed the bridge so nothing can come across. I mean, what has happened is idiotic. It really is.”

The delays are happening during one of the busiest weeks of the year at border crossings. Semana Santa, or Holy Week, started on Sunday and lasts through Saturday, and many families typically cross the border to see relatives, causing long lines at the bridges.

Teclo Garcia, the economic development director for Laredo, said city officials understand there are security issues the state wants to address, but the state didn’t contact local officials to discuss the best way to address those issues.

“We’re dealing with 20,000 truck crossings a day [in Laredo] — there are security issues but that’s why our federal partners are there,” Garcia said. “If [the state] wants to do more we can do more, but let’s not impede trade.”

Garcia said it’s too soon to know what economic impact the DPS inspections will have on the city, which has the busiest commercial crossings on the southwest border, but he added that eventually they could affect the entire country.

“Of course, this is going to affect Laredo, El Paso and Brownsville, but the real impact is going to be in the supply chain which is already strained and the consumer,” Garcia said.

On Saturday, five state senators from the border region asked Abbott in a letter to reconsider his directive, saying the increased inspections were “generating delays and stalling the movement of goods at the ports of entry.”

On Monday, state Sen. Juan “Chuy” Hinojosa, D-McAllen, whose district includes the Pharr bridge, called the situation “a crisis and a mess that has been created, but it was not necessary.”

“Many of my constituents are asking ‘Why are we being punished?’ The Valley supports border security, but this doesn’t seem to have much or anything to do with border security,” Hinojosa added. “This is hurting people in their pocketbook.”

State Rep. Terry Canales, D-Edinburg, said a group of state House members from border communities also plans to send a letter to the governor. He said the governor’s announcement last week appeared to be purely political and the new inspections will have little effect on border security.

“All the stated goals of border security are not working and they don’t have a practical aspect other than [being] red meat,” he said. “I’m a big fan of beef for dinner but enough red steak and red meat will kill you.”

Abbott on Monday touted the state’s increasing border security efforts during a speech at the annual meeting of the Texas Border Sheriffs Coalition in El Paso, saying it’s been successful in apprehending drug smugglers and people previously convicted of murder. He said the Biden administration’s plan to end Title 42 next month could be “cataclysmic” for border communities because immigration officials are expecting up to 18,000 encounters a day with immigrants once Title 42 removals end. The current average is 6,000 a day.

According to an investigation by The Marshall Project, ProPublica and The Texas Tribune, the state had been including drug seizures and arrests for crimes far from the border to its Operation Lone Star tally — and later revised the arrest numbers.

Last week, Abbott announced the state would be transporting migrants who already have been processed and released by federal immigration officials to Washington, D.C., or other places on buses. Later, he said the bus rides would be voluntary.

On Monday, Abbott said the buses are already available in some border counties and instructed local officials who need a bus to contact their county emergency management coordinator to request one.

He said the state is offering bus rides because some border cities don’t have the services or infrastructure to help transport the migrants to their final destination. 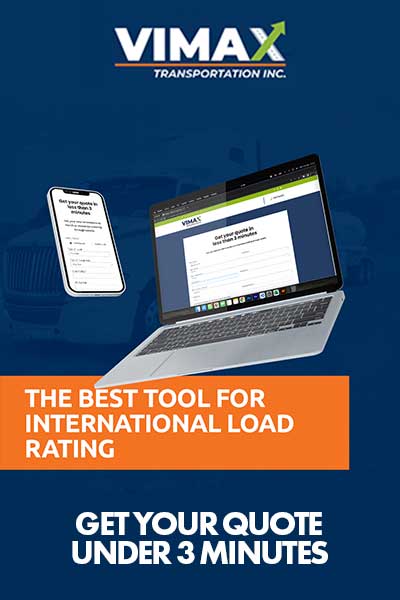 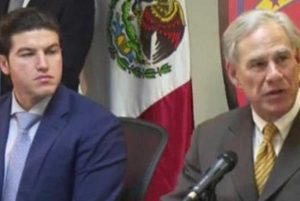 Greg Abbot celebrated said agreement and recognized the state of Nuevo León for its actions to prevent illegal human trafficking.

Send Us A Message

THE UNIFIED VOICE OF TEXAS TRUCKING

Members of the Texas Trucking Association 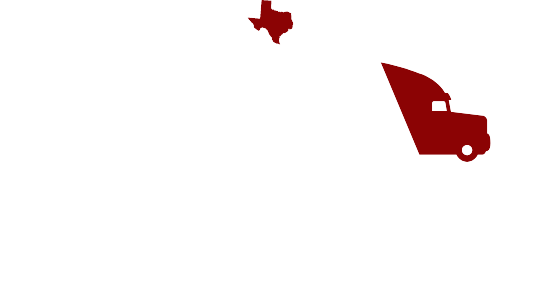